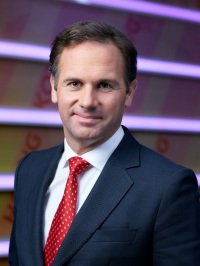 The Wharton Club of Hong Kong is highly pleased to feature John Dawson, former 20-year Bloomberg anchor, in its Speaker Series at a dinner at the Hong Kong Club on 13 October at 730 PM.  John will impart some skills on how to tackle media interviews and special tips on dealing with the financial media.

John recently joined Artemis Associates, a leading Asian public relations firm based in Hong Kong, as a partner specializing in financial PR.   John will talk about his career in TV Broadcast, live on-air as the prime-time anchor, in the newsroom, in the field and recount stories of the CEOs and top political and sporting names he has interviewed in his Bloomberg career, including nearly losing his job as an intern so he could meet Princess Diana.

John will share his insights from interviews and field jobs with CEOs, Prime Ministers and sportsmen who have been the most inspiring – and the most nerve-wracking to interview, including GE’s Jack Welch, BP’s John Browne, WPP’s Martin Sorrell, former Italian Prime Minister Silvio Berlusconi and former UK Prime Minister, Tony Blair. He will show a dvid of his skirmish with CNN’s Richard Quest at a Cannes conference and sports pieces he did with Manny Pacquiao and David Beckham.